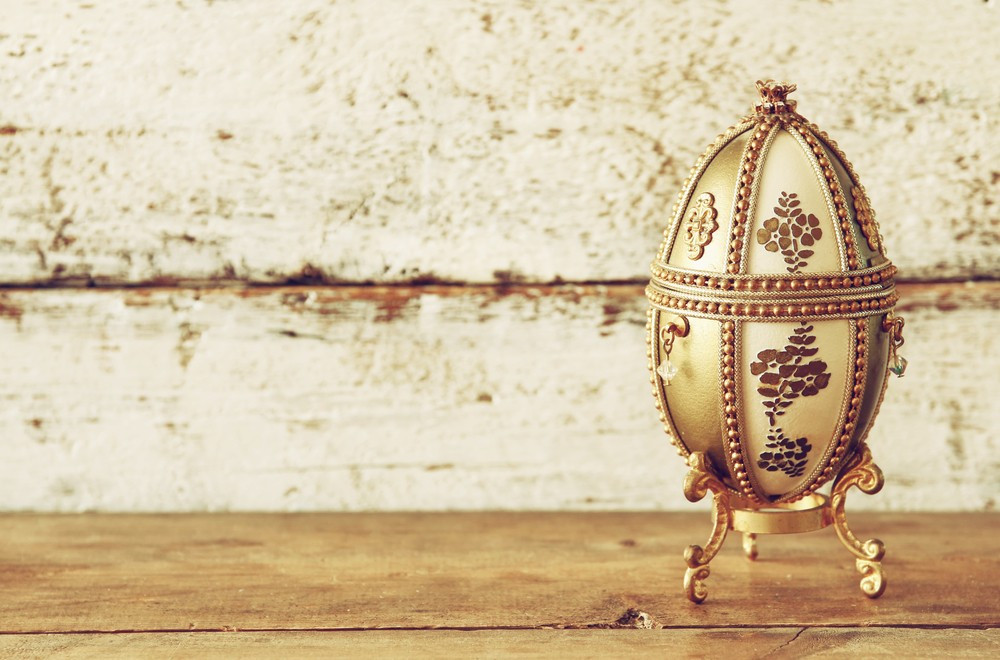 Fabergé was born on May 18, 1846 in St. Petersburg, Russia. His mother was Danish and his father, master goldsmith Gustave Fabergé, was of French decent with a Huguenot background. The family emigrated from France in the seventeenth century. They first moved to Germany, and in 1800 to a Baltic province of Livonia before settling in Russia.

He was educated at a German-speaking school and later attended commercial courses in Germany. Yet most importantly, he travelled throughout Europe taking courses in jewelry making and visiting museums to further his education on jewelry. His inquiries into art led him to study the renaissance and baroque designs, and he was especially influenced by the French rococo of the eighteenth century.

At age 26, he decided to return to St. Petersburg, and shortly after his return he married Augusta Julia Jacobs. He took over from his father the management of the Gustav's jewelry firm, House of Faberge, which he founded in 1842. Under the guidance of master goldsmith Hiskias Pendin, young Peter became a master in his own right.

For ten years, between his return to Russia in 1872 and Pendin's death in 1882, Peter honed his craft, improved his technique and focused on his technical and artistic abilities. He developed a mastery of fine detail and ability to work in a variety of precious metals and gems, including hardstone carving. Collectively, they all contributed to his unique style. Over time, his name became throughout Europe's nobility class, and he started working on creating exceptional items commissioned by royals across the continent.

By the time of Pendin's death, Fabergé's parents and siblings moved back to Germany, settling in Dresden. He took full control of House of Fabergé, and set out to grow the business. He was awarded the title Master Goldsmith, which permitted him to use his own hallmark in addition to that of the firm. During this period, his younger brother Agathon joined Carl and served as his main assistant in jewelry design.

In 1882, Fabergé participated in the Pan-Russian Exhibition that was held in Moscow. The brothers got a rave response, and Carl was awarded a gold medal and the St. Stanisias Medal. One of the jewelry items they showed at the exhibit was a replica of a 4th-century BC gold bangle from the Scythian Treasure. The bangle was kept at the Hermitage Museum, where Fabergé at times did maintenance and repair work on some of the jewelry held by the museum. Tsar Alexander III declared that he could not distinguish the Fabergé's work from the original and ordered that objects by the House of Fabergé should be displayed in the Hermitage as examples of superb contemporary Russian craftsmanship.

Two years later, the Tsar commissioned a gift for his wife for Easter from Fabergé – an Easter egg. The Hen Egg was made of gold coated with opaque white enamel to look like a real egg. A thin band of gold where the two halves of the shell are joined is visible around the middle of the egg. When twisted, the two halves of the outer shell open to reveal a surprise, a round "yolk" of gold with a matte finish. The yolk also opens to reveal a varicolored gold hen set with ruby eyes. The hen is hinged on the tail feathers which allows it to also open up to reveal still two further surprises, a gold and diamond replica of the imperial crown and a tiny ruby pendant that was suspended within it on a chain.

The intricate egg, with its unusual enamel work, smooth mechanics, and delicate design and surprises was later to be known as the first Faberge Egg. The gift delighted Tsarina Maria Feodorovna so much that a few weeks later Faberge was awarded with the title Goldsmith by special appointment to the Imperial Crown by Tsar Alexander III. With the title came a standing order to make an egg every year for the Tsar. Peter Carl Fabergé produced them every year from 1895 to 1916.

Being a goldsmith with an appointment to the country's royal family, gave Fabergé full access to the important Hermitage collection, where he studied the unique works of other master jewelers. Among them were the eighteenth century Jean-Jacques Duval and Jérémie Pauzié. Their works inspired him, and he went on to develop the art of enameling, bringing it to new heights. He abandoned the traditional French styles of the time and developed his own, groundbreaking style, one that set him apart from other jewelry designers and which, together with his fine craftsmanship, greatly contributed to his success.

Their meticulous approach led Agathon to make ten or more wax models, so they could examine various stone settings until they were satisfied that each precious gem would be displayed optimally. Agathon's own designs started to become desired as well. He took advantage of their mechanical knowledge and made bejeweled household items from gold and enamel, among them electric bell pushes and cigarette cases.

The house of Fabergé gained clients from all over Europe, almost exclusively royalty and aristocracy. Their clients wanted unique, one-of-a-kind items, of the highest craftsmanship and with clever mechanics. Those included a Trans-Siberian train that drove through an egg, carriages, animals and more, all built on specific orders.

Fabergé knew that success could be fleeting and decided to leverage it to expand his business. He started publishing a catalog of his objets d'art such as brushes, jewelry cases, and jewelry items such as cuff links. All along, he kept training craftsmen and slowly grew his business. Art collectors from around the world started buying his creations. He created exhibitions of his works around the world and attracted thousands of visitors, some of whom became clients.

Yet the heart of his business, his claim to fame during his life, and ultimately his legacy, were the eggs he created for the Tsar. While at first he received specific instructions, after a while Fabergé was given full artistic freedom, and the eggs quickly became a surprise not only for the Tsarina to whom they were gifted, but also for the Tsar who ordered them. The Tsar's only request was that each egg be unique and that each hide a surprise inside.

Upon the death of Alexander III in November 1894, his son, Tsar Nicholas II, continued to commission the Easter eggs, expanding the order to two eggs each year, one for his mother and one for his wife, Alexandra. Over the years the two women amassed a large collection of Fabergé Eggs. Tsarina Maria Feodorovna was gifted with 30 eggs and Alexandra another 20.

Fabergé continued to the create the Easter egg gifts until the October Revolution in 1917, when the royal Romanov family were forced out of power and later executed. Most of the Faberge eggs, together other treasures, were confiscated by the communists who took over. The last two Easter eggs that Fabergé made for the royal family were never delivered nor paid for.

The company made over 150,000 items from 1882 to 1917. In 1916, a year before the revolution, The House of Fabergé went public, becoming a joint stock firm, raising 3 million rubles. Following the revolution, the firm was acquired by a group of the company's employees. In 1918, the company was nationalized by the Bolsheviks, which brought the jewelry firm to an end.

Peter Carl Fabergé decide to leave Russia, fleeing to Switzerland in 1918. His family later said that he never recovered from the quick downfall. He died on September 24, 1920 and is buried alongside his wife in Cannes