The newest member of this elite group of mines is Botuobinskaya mine, located in the Nakyn kimberlite field, around 200km northwest of Nyurba in the Yakutia region of Russia. The mine began production in 2015, and ramped up to an estimated production of 1.5 million carats in 2016. The mine is located just three kilometers from the Nyurbinskaya pipe, the principal asset within the Nakyn field.

Botuobinskaya had an estimated 69.3 million carats of reserves as of January 1, 2015, and should continue to produce for more than 30 years. It is also one of the world’s highest-grade mines, with an average grade estimated at 5.2 carats per tonne. It is the first major diamond mine discovered in the Yakutia region of Russia in more than 10 years. The mine is operated by Russian mining giant ALROSA.

Diamond-bearing gravels were discovered in the area of the Venetia mine as early as 1903. In 1969, De Beers embarked on a project to find the source of these diamonds, and discovered the Venetia kimberlite in 1980. Construction began in 1990, and the mine was in full production by 1993. It is currently the largest producing diamond mine in South Africa, and is located northwest of Kruger National Park near the border with Zimbabwe.

In 2013, De Beers committed to invest up to $2 billion to expand the Venetia mine underground, with production to commence in 2022. The expansion plan could add considerably more reserves to the project than currently estimated. However, more analysis is needed to upgrade the inferred resource to a confirmed reserve. The company estimates that the expansion will extend the life of the mine until 2046.

Grib is the only significant diamond mine in Russia that is not operated by ALROSA. It was discovered by oil and gas giant Lukoil during prospecting for natural gas near Verkhotina in the Arkhangelsk region of North-Western Russia. 2016 production is expected to be around 4.5 million carats.

Analysts expected Lukoil to sell the Grib mine. But it has proven to be profitable at a time when the company has had to write off other assets, thanks to the slump in global oil prices. Grib has an estimated reserve of 91.5 million carats, and is expected to continue producing for 20 years. Production rates continue to expand.

Although now nearing the end of its lifespan, the Argyle mine in Australia has been the largest producer of diamonds in history, and has produced more than 750 million carats of diamonds since 1982. After 30 years of mining the open pit, the mine transitioned to a fully underground operation in 2014, with an $800 million investment from Rio Tinto, the mine’s owner.

Although the mine still has an estimated 93 million carats in reserve, production rates for 2016 were only 16.8 million carats, and the mine is expected to be fully depleted by 2022. The mine is located in a very remote area of Western Australia, where summer temperatures regularly exceed 40 degrees. The mine was first discovered in 1979 and is the world’s only economically viable lamproite diamond mine (as opposed to kimberlite, a sort of rock cousin).

Argyle is a very large and important source of both low-quality diamonds and fancy colored pink and red diamonds. Its eventual closure will no doubt have a significant impact on the diamond industry, and change the face of global diamond supply. 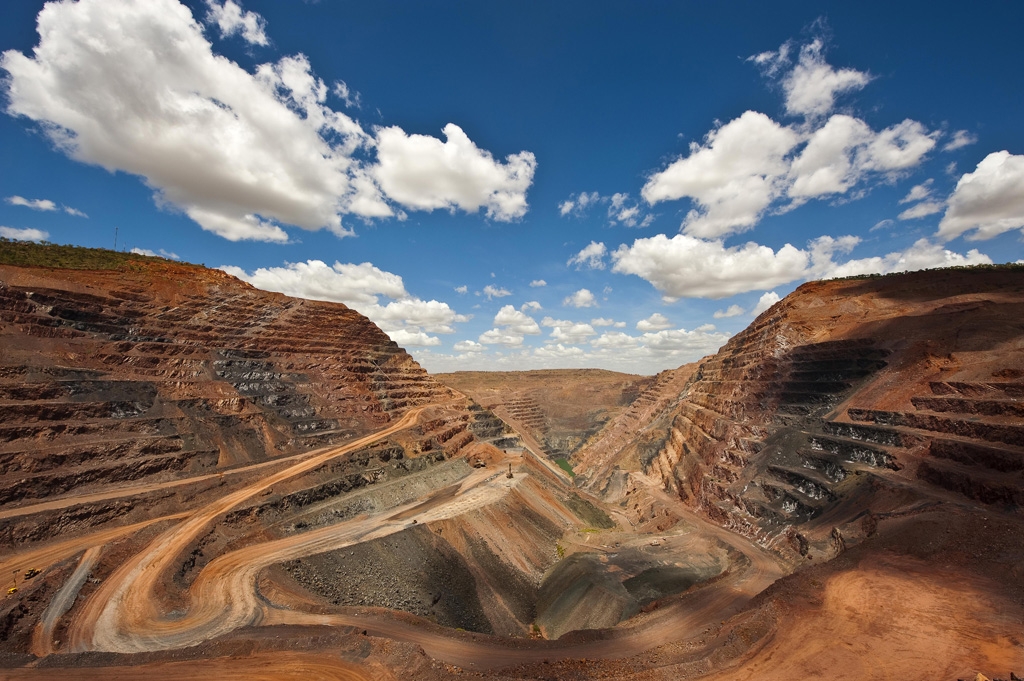 The Mir mine is an awe-inspiring site, and now ranks as the second-largest excavated hole on Earth. It is so big that flying over the mine is banned because of reports of airborne vehicles being sucked into the pit by the temperature and pressure deviations around the hole. It measures nearly 1.2 km in diameter, and more than 500 m in depth. The mine played a very important role in the development of the diamond industry and the eventual collapse of the De Beers cartel.

The mine was first discovered in 1955, and would begin producing in the early 1960s. It is located in one of the harshest environments on the planet, and miners reportedly used jet engines to thaw the permanently frozen ground in the area. As an open pit, it would produce up to 10 million carats a year for decades, before being closed in 2001. In 2009, an underground expansion plan began to once again extract diamonds from the mine.

Udachny has been the most prolific mine in Russia’s history and could be considered the twin mine of Mir. It is 640m deep, and is so steep in places that it poses a safety risk for hauling trucks to fall off the side of the road. The open pit has been in operation since 1971, and has yielded $80 billion worth of diamonds from 340 million tonnes of ore. Like Mir, Udachny has transitioned into a fully underground mine, with an over $800 million development plan. Development is currently underway, and will continue until 2019. Udachny currently produces about 4 million carats per year, both from open pit and underground mining, but could exceed 8 million carats at peak production in 2019.

The underground extension could add more than 50 years of mine life to Udachny, and it will likely continue to be one of the world’s most important sources of diamonds for decades. The mine plan calls for a maximum underground depth of 4,600 feet, or 1.4 km below the surface.

Catoca is the largest of the diamond mines in Angola, accounting for 70% of the country’s production. It was first discovered in 1965 by artisanal diggers in the region. A mine was developed in 1994, and is owned and operated by Sociedade Mineira de Catoca, a joint venture which includes the state-run mining company ENDIAMA, and Russia-based diamond producer ALROSA, amongst others. The mine began production in 1997, and underwent an extensive expansion project in 2005 to add a second processing plant.

In 2016, Catoca produced an estimated 6.5 million carats, making it one of the largest diamond-producing mines in the world. Its current diamond reserves are estimated at 110 million carats, and it has a projected mine life until 2034, at which point it will have a mine depth of 600m. It will then transition to underground mining for another 6-8 years.

Jubilee was the largest diamond mine in the world for many years, but it dropped to fourth spot due to high production rates at other mines over the past several years. The mine’s 2015 production was estimated at 9 million carats. However, with the addition of unproven underground reserves, it may still prove to be the largest diamond deposit on the planet.

Jubilee was discovered in the Yakutia region of Northern Russia, and has been in production since 1986. It continues to be the most prolific mine in Russia, with production rates and revenues more than double that of the Grib mine.

Not surprisingly, the highest producing diamond mine in the world by value is also one of the largest. The Jwaneng mine is located 160 kilometers southwest of Gaborone in the south of Botswana. Jwaneng, meaning ‘a place of small stones,’ was the largest producer of diamonds in 2015 in terms of value. With production of nearly 11 million carats at an average price of more than $200 per carat, Jwaneng production value exceeded $2.3 billion in 2015, dwarfing production from any other mine.

2014 saw the completion of the cut-8 expansion project, which added up to 95 million carats of diamond reserves to the mine, and extended its expected life to 2028 or beyond. It also made Jwaneng the richest diamond mine on the planet in terms of the value of both its annual production and its diamond reserves. The cut-8 expansion will increase the depth of the mine to more than 850m.

Jwaneng is owned and operated by Debswana, a joint venture between De Beers and the government of Botswana. It was discovered in 1972, and reached commercial production in 1982. The mine produced more than 22 million carats in 2010, and is expected to continue to produce at a rate of 12-to-15 million carats per year.

According to De Beers, the Orapa mine saw a major expansion of its reserve in 2015, after additional drilling at depth enabled the company to elevate inferred resources into the reserve base of the mine. This helped elevate Orapa into first spot for the most diamond reserves in a mine on Earth.

The mine in Botswana is located about 500km northwest of the capital city of Gaborone in central Botswana. Orapa, meaning ‘resting place of lions’, was discovered in the 1960s, shortly after Botswana gained independence from Britain. It began production in 1971, and has been one of the highest-producing mines in the world, ever since hitting a peak production of 17.3 million carats in 2006.

The mine is the oldest of four mines to be operated by Debswana, a joint venture between De Beers and the government of Botswana. It has the largest footprint of any diamond mine in the world, with a surface area extending over 118 square kilometers. The mine is made up of two separate kimberlite pipes that converged at the surface of the Earth more than 93 million years ago.

Orapa remains one of the highest-producing diamond mines in the world, with 2015 production estimated at 12 million carats. De Beers reports Orapa reserves of 151.4 million carats, with production expected to continue until 2033.

These 10 prolific mines produced an estimated 66 million carats of diamond in 2015, or about 50% of global supply. Combined, they account for nearly 1 billion carats of diamonds in the ground. Although many smaller mines have closed, advanced technologies and underground mining techniques have extended the lifespan of some mines beyond what forecasters may have predicted, and have even brought previously closed mines back into production.

Production rates at some of the mines are slowing down, and the world’s largest supplier of diamonds by volume, Argyle, is likely to cease production in 5-6 years. But it would seem as though the supply crunch that many have predicted is perhaps still some years away. There can be no doubt that natural diamonds are a finite resource and will eventually be depleted in the absence of new major discoveries, but the exact timing of that is questionable.